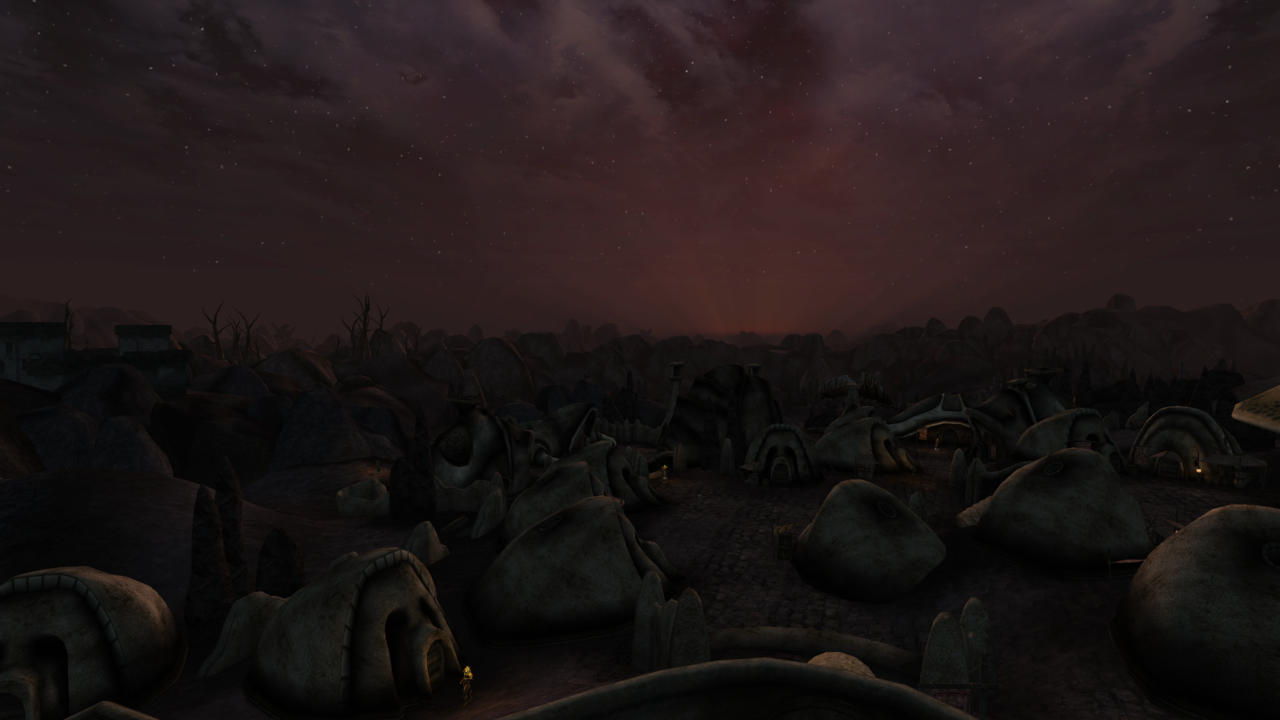 If you’ve played Morrowind, you probably know exactly where this is - just outside Ald Ruhn in the Ashlands. Go north and you’ll find the small town of Gnisis, containing both a temple and Imperial guard post. To the east is forbidding Red Mountain, forever surrounded by the mystical Ghostfence. Just to the south you’ll find the Bitter Coast with its mushroom trees and dense marshes.

There are many things that make Morrowind special to me, but one of the foremost is the sense that I know the place. I’ve walked Morrowind from north to south. Its roads feel like home. I can still tell you, years later, the best routes to travel from Vivec to Tel Mora.

I can already see some of you rolling your eyes. “Oh yeah, this old argument. Fast travel is bad, yadda yadda, but seriously - who wants to spend fifteen minutes in a video game just walking?” And you’re right! I love Morrowind, but even I am not immune to the tedium. These days, it’s the big thing that puts me off from playing it again. And yet, something always makes my mind turn back to Morrowind, and think - why did that make me feel the way it did?

Note that this post contains spoilers for Morrowind, Dark Souls, and Subnautica.

Morrowind, Dark Souls 1, and Subnautica are all open-world games which do not have fast travel. Beyond that, they don’t seem to share much in common:

Despite their differences, these games all share the same nameless quality. Their game worlds feel more connected, more solid, somehow, than those of other open-world games. Why is this? Why would removing fast travel lend this kind of importance to slow travel?

In these games, every time you venture forth into the wilderness you embark on a journey away from home. There is something special about returning home after a long journey that I believe all these games replicate.

The best example I can think of comes from Dark Souls 1. You’re often in hostile spaces for hours at a time, battling hellish creatures and completely unfair odds. A return to Firelink Shrine is an opportunity to finally take a breath, to talk to some normal humans, and to take a break from the despair pervading the world outside.

Contrast this to Dark Souls 3, where returning to Firelink Shrine is as easy as resting at a bonfire. There’s no journey, and that makes the shrine lose significance as a safe haven. It’s just too easy to get there! You begin to take it for granted.

That being said, the lack of fast travel in Dark Souls 1 is undeniably frustrating. What if your blade breaks down in the depths of Blighttown, and you’re out of repair powder? What if you go run all the way to a boss, only to find that you’ve forgotten to purchase a key item at Firelink? Absent-mindedness becomes punishing.

Earlier we said that we “get to know” Morrowind, as a place. When we we say that we know a place, what do we really mean? I’ve come to see this as mastery of a system.

It’s a bit odd to use “mastery” in this context. We often use this word when talking about systems in other, more mechanically driven, games. For example, the process of mastery over Super Mario World might look like this:

When forced to slow travel, you attain mastery over the the game world.

In games with fast travel, you are not required to engage with the game world in this way. When you reach a place for the first time, you never need to remember how to get there again.

If this navigational mastery makes players feel good, then why doesn’t every game include it? The main problem with game-world mastery is that it is shallower than other kinds of mastery.

In Super Mario World, you can continuously improve your platforming skills even beyond the end of the game. In Counter-Strike or DOTA, the skill cap is almost non-existent. The cap for mastery of a game world, on the other hand, is reached as soon as a player has memorized the important parts of the map. No matter how you slice it, humans are built for 3d navigation, and navigating a map is not hard.

This is an important conclusion. We do not enjoy backtracking not only because it is repetitious, but also because it gives us no sense of mastery. The games which are most suited to fast travel are the ones in which you tend to retread your steps. 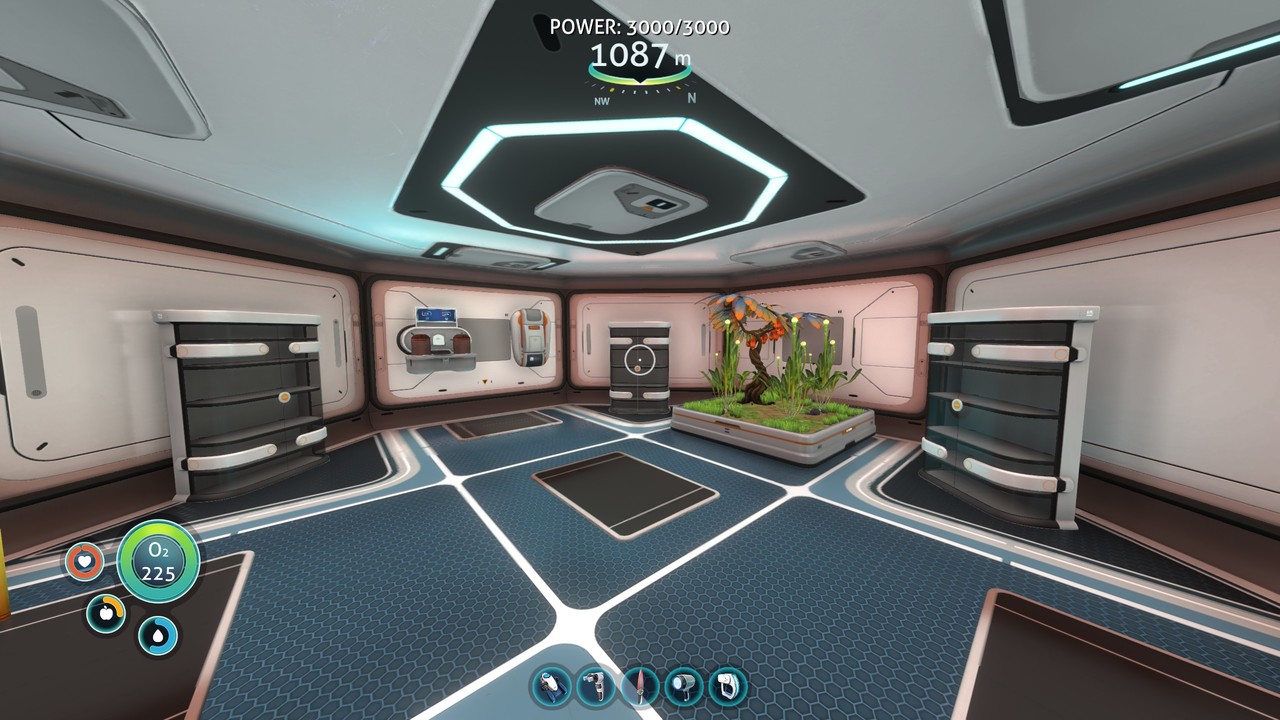 There are, no doubt, other principles than the two mentioned above that contribute to the nameless qualities of games without fast travel. For the purposes of this article, let’s stop there and rehash a bit:

What problems does fast travel solve?

What problems does fast travel introduce?

Thus, an ideal game would have these qualities:

Unfortunately, I don’t know of any game that achieves all that. They seem to instead lie on a spectrum. Let’s take a look at how our slow-travel games have tried to solve these problems. 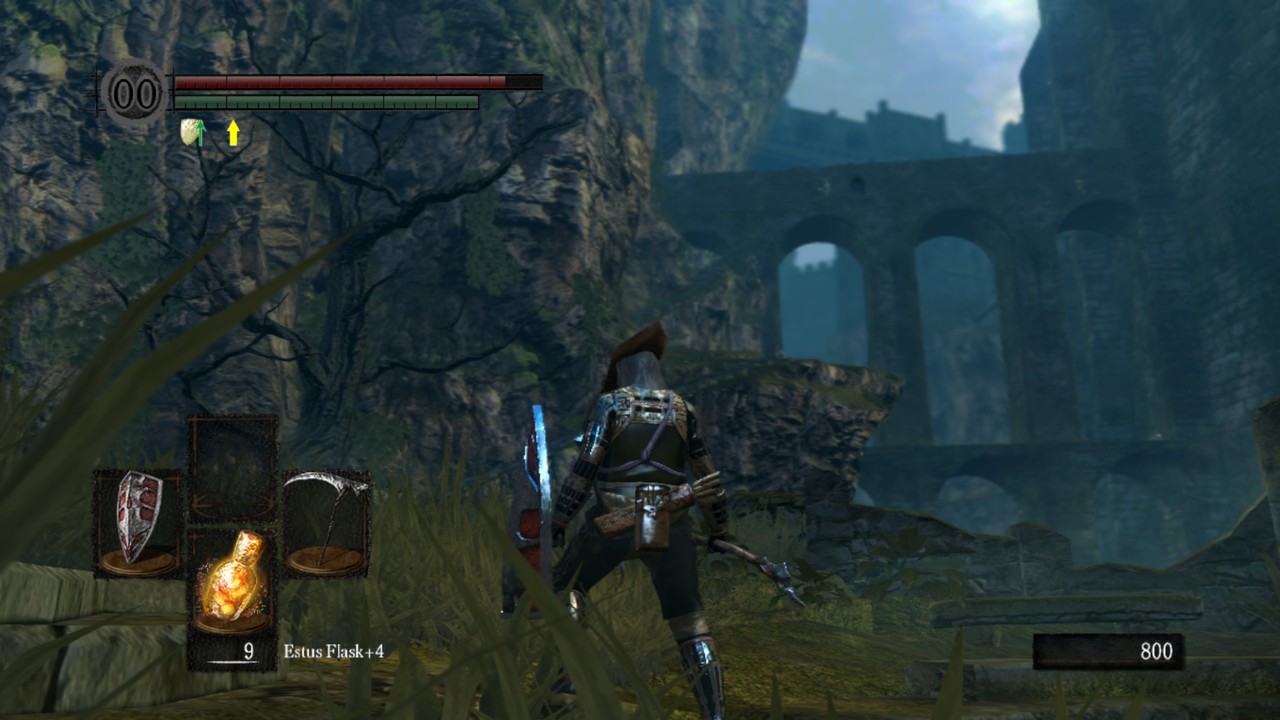 Dark Souls 1 does not attempt to solve either problem. It is extremely punishing in both aspects. The levels are extremely well laid-out to maximize the satisfaction of mastering travel between them, but once you master traversing an area, the game will often force you to do it over and over again to boredom. Even the game acknowledges this weakness! Near the end of the game, it gives you a way to fast-travel.

That being said, the game still acclaimed for its level design, and I’ve already mentioned how strong Firelink Shrine feels compared to the weaker safe havens of later Dark Souls games. 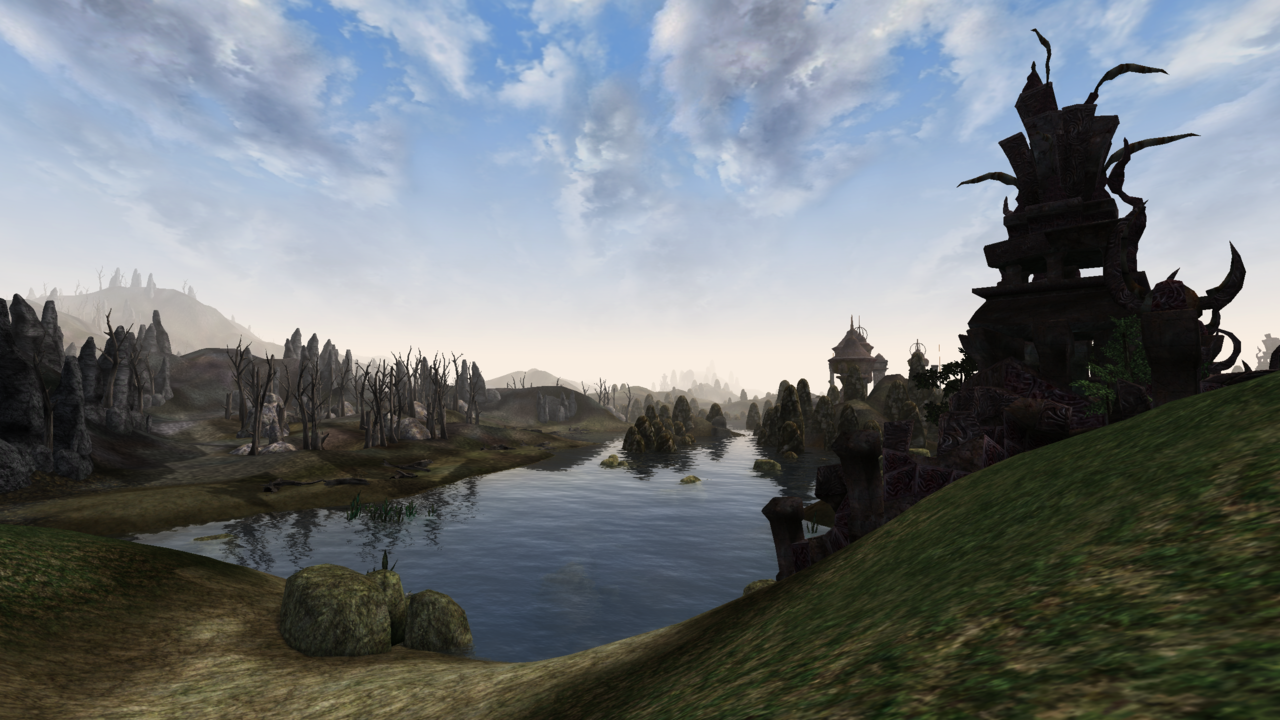 Morrowind, while being the earliest of my examples, did attempt to solve the mastery problem. When you first start out, you walk everywhere, either from a lack of money or ignorance.

Later, as you find out about stilt striders, Mage’s Guild teleportation, and the various teleportation spells, not only does it become easier to travel, but you also get an additional sense of mastery by figuring out the ways you can use each of them. This is why people say Morrowind, as a place, feels connected - because of this mastery. 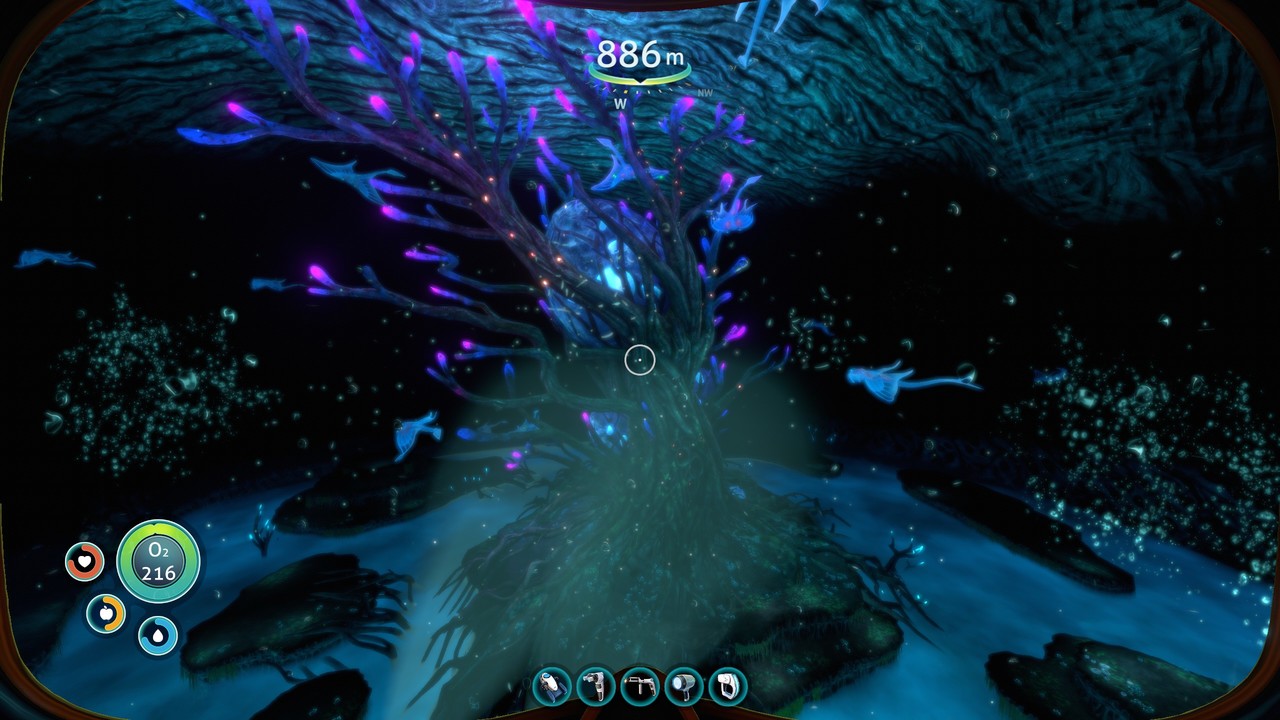 Subnautica is the most modern of these examples. The game is centered around travel and exploration, rather than combat, or level progression, so naturally it takes a different approach.

At first, you can only explore a within a small distance of your home base. As you expand your codex of blueprints through exploration, you begin building vehicles which can be used to explore further, but the time needed does not grow proportionally. That is, exploring one hundred meters in the early game takes almost as much time as exploring three hundred later in the game.

This allows the game to retain the feeling of mastery without the tedium. As you explore, you find new places to remember, but you also find ways of exploring faster so that you can pass through the old areas without much hassle. It helps that the game’s scenery is gorgeous, too!

This could only work in a game like Subnautica where exploration is, in itself, both the goal and the reward. It’s no mistake that the worst part of the game is the end sequence. After you’ve exhausted new locations to explore, the rest of the game is tedious and boring (and thankfully short). 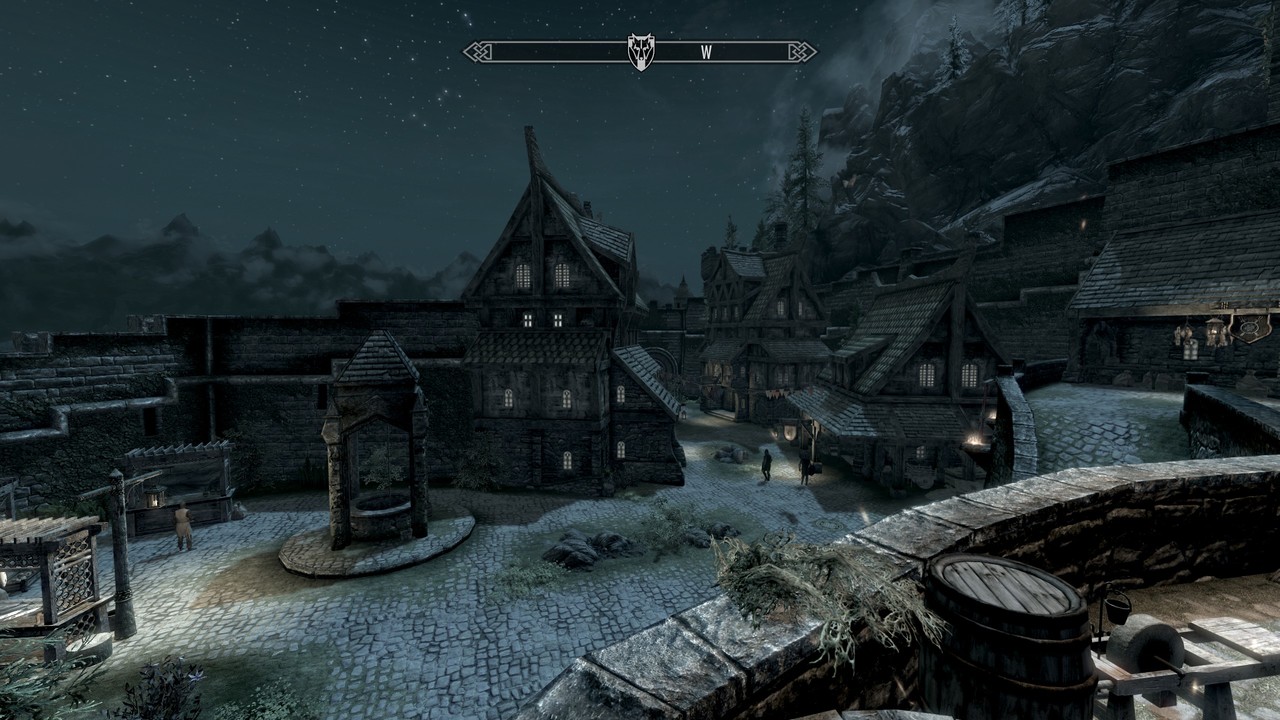 I’ve identified why games which eschew fast travel feel special to me. How about games with fast travel?

I’ve played Skyrim, The Witcher 3, Far Cry, and more - and I’ve enjoyed my time with them! But do they give me the same feeling as Morrowind, or Subnautica? No, they absolutely do not - but they give me a different feeling, not necessarily a worse one.

In the end, games with fast travel support one kind of experience, and games with slow travel, another. Perhaps one day we’ll solve this mystery of how to get the upsides with none of the downsides; until then, drop me a comment below if you’ve got any ideas.