In a previous post, I covered the guts of the dropdown console I wrote for my very simple FPS. However, I didn’t mention any techniques on how to actually render the console. When I was first implementing this, it didn’t seem too bad - just throw up a quad with some text on it, right?

In actuality, text rendering turns out to be a fairly non-trivial task. My first attempt loaded each character as a single texture, and drew one quad/character at a time. However, I quickly ran into performance problems with this - even with just a few hundred characters on screen, there was noticeable lag.

The solution to my problem was to pack all of the characters into one texture, and then batch the draw calls together by line. This reduced hundreds of draw calls to just ten or twenty. In this post, I’ll cover the algorithm I implemented to pack multiple textures into one.

Most of the algorithm is explained on this webpage. However, if you take a look at the algorithm as presented, you’ll see that the texture size is static; if the user wants to pack more textures but their texture atlas is full, they need to generate a new one.

Since different typefaces have different sizes for different glyphs, it’s difficult to predict how large of a texture atlas we need in advance. We could just re-pack the texture every time it becomes full, but I came up with a solution that makes this unnecessary. I’ll first cover the original algorithm (or, rather, something very close to it) for completeness, then present my modification.

Given a bitmap texture and the width/height of that texture, we want to find a space in the texture atlas where we can place that texture. We’re going to use a tree-based, recursive method which repeatedly subdivides a square. 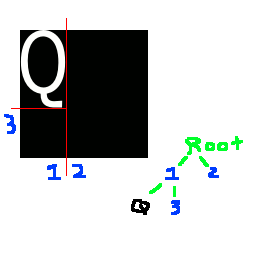 After we insert another glyph, the tree and image look like this: 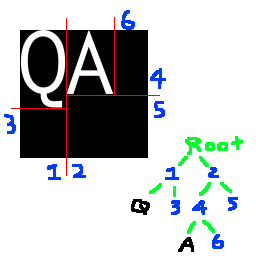 Zone 2 has now been subdivided in the same way; first vertically, then horizontally, whereupon we create a space just large enough to hold the new glyph “A”.

In the original algorithm, we’d continually do this until we run out of space, and then create a new texture. Here’s where my change comes in. Instead of having the root node use the real size of the texture, we’ll keep track of that separately using a variable textureSize. The root node instead has a size of INT_MAX. That means when we split the root node, new nodes along the texture atlas boundaries will have a very large size.

However, that means when we determine whether a texture fits within a node or not, we need to calculate of the “real size” of any node along the boundaries. We can do that using the following steps:

With this change, we’ll still run out of space, but when we do we can simply change textureSize and retry. The algorithm will then dynamically recalculate the “real size” of nodes along the border without having to repack nodes again.

Let’s get into some implementation details. Here’s the definition for the nodes in the tree. Note that I’m using glm for vector operations, but feel free to use any math library.

Using this struct, we can write the algorithm to find a space within the tree for a new texture:

When we split a node, we always pack toward the left node; that’s because the left and top is where we begin.

There’s still a couple of things to take care of; resizing the buffer when it gets full, and constructing the actual texture. We take care of those in the actual method which is exposed to callers:

I’ve delegated the responsibility of saving the position and size of the packed glyphs to the caller.

To actually draw the text, there are still a few details left - for example, alignment of each character with respect to each other and to the baseline. For those, I’ll refer you to this excellent tutorial, which covers all the aspects besides texture packing. Simply pack the Freetype glyphs and use the packed texture when rendering.